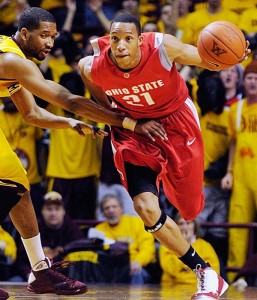 I’m a basketball fanatic so this post goes out to the national player of the year and Ohio State Buckeye Evan Turner, who was the #2 pick in the NBA draft last night.

He was drafted by the Philadelphia 76rs (27-54) who suck pretty bad.  I guess its better to go to a shitty team that needs you than to a good team that doesn’t.

Evan Turner highlights after the jump: