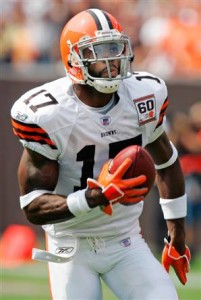 Braylon Edwards cant catch. If you’ve watched the browns play any of the past few seasons you know this is a fact.  He drops a lot of balls he should catch, and every now and then he catches something amazing that makes you think that maybe (just maybe) he really should be their #1 receiver.

He’s been with the Cleveland Browns for a few years new and has always been their number one receiver, and during that time they never seemed to even want to draft another great receiver, which to me indicates that actually saw something in Edwards that maybe we didn’t see.  We see an extrememly physically talented reciever that can’t catch, and they see the a future hall-of-famer, i guess.

At any rate, today Braylon Edwards got traded, four games into the season for basically nothing.  Now, him getting traded to most cleveland browns fans is a relief, and I’m sure a lot of people are cheering right now because as i mentioned earlier, Braylon Edwards can’t catch, so him being traded in itself isn’t that startling.  But him being traded 4 games into the season, after basically doing what he’s been doing for years is a little startling, as is him being let go for basically nothing.

But if you look at the big picture and remember what Braylon Edwards did last week it makes perfect sense; Braylon Edwards punched one of Lebron James’ best friends at a nightclub.  Full story here:

No charges were filed. Nobody reported injuries.  But Lebron made a public statement about Edwards being a childish dude, who’s jealous of their success, and doesn’t understand the importance of being a rolemodel.  None of those are particularly scathing, but you can’t ignore a) amount of tact, b) the amount of power in Lebron’s words, and c) the result–which is Braylon Edwards non-catching ass got fired.

He fucked with the wrong person (basically the backbone of the cleveland economy), at the wrong time (your team sucks and you cant catch) and got his walking papers almost immediately. Shit is kinda funny when you think about it, because Braylon Edwards must have been really feeling himself to punch a guy that he knows is Lebrons best friend in public like that.  I’m sure in his mind he was thinking “I’m the franchise player for the browns…I’m just like Lebron…I’m untouchable, I’m about to steal on this little cat for being outta pocket“. Well guess what Braylon? You’re no Lebron James.  Shit man, you’re not even Terell Owens or Randy Moss, because at least those dudes can catch and give teams a reason to put up with their shit. You on the other hand aint tight, nor are you a very stategic dude, and as a result your bitch ass is outta here!!!! hahahahhahaha!

Now, while I do find this shit entertaining, dont think for a second the browns are gonna get any better with Edwards departure.  They’re 0-4 and kinda suck, but at least they can’t get any worse, right?