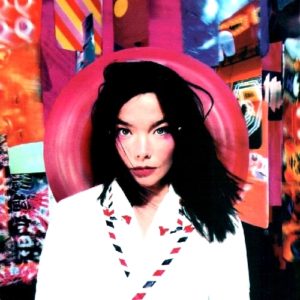 More than ever, since the release of Adventures in Counter-Culture, one of the questions I get asked the most often is who my favorite artists are and what artists have influenced me. I guess back when my album 1988 came out it was pretty obvious, but now its not so clear since adventures is such an eclectic album.

I realized the other day that while the people who hang around with me know that my taste in music is extremely varied, the people who listen to my music may not, so I always thought it would be cool to actually write about artist or songs that influenced and inspired me.

The first artist I would like to talk about is Bjork.

I think I first heard of Bjork back when I was still working as a Computer Programmer and one of my coworkers told me to check out her music.  I had just starting to dig heavily into old records and other genres of music at the time , but I wasn’t really ready for Bjork, so I didn’t follow-up.

Then one day there was a documentary on PBS about her, so I video taped it, thinking it might be cool to record to get some quotes for my own albums.  This was the point that I recognized that Bjork was everything that being a real artist is about; passionate about her music, writing songs for herself, extremely progressive musically & visually, and a real visionary who doesn’t make records for the status quo.  As an artist, you can either make records for what music is, or what you want music to be; and bjork makes music for what it should be.  This means that she can at times be hard to pin down: electronic, classical, ballads, ambient, futuristic, and apocalyptic–Bjork manages to be all these things at the once.

After watching the documentary, and seeing her process for creating her music I immediately bought her album Post.  The first song that really grabbed me was “Possibly Maybe”, and at the time I think it was mostly because I recognized DJ Shadow sampled it on his debut album Endtroducing.  But once that bit of novelty wore off I was able to appreciate the song for what it was, and was it was to me was amazing.  The remix is even crazier.

After that I bought all of her albums and created my own best of bjork mix, that to this day I still listen to.  I’m always amazed that records she put out 15 years ago still sound futuristic and progressive today.

Bjorks music has influenced me in the best way that artists should influence people: by challenging them. I wasn’t a fan of electronic music but thru her music I began to appreciate it. The same for dance, or any of the other styles of music her albums encompass.  And what’s fresh about her is that she just does it without any pretension.  It’s obvious by listening to her music that she sees music with a much wider scope than most people do, but she never makes you feel like she’s trying or reaching–she’s just doing whatever she wants to do and the results are usually pretty damn good.